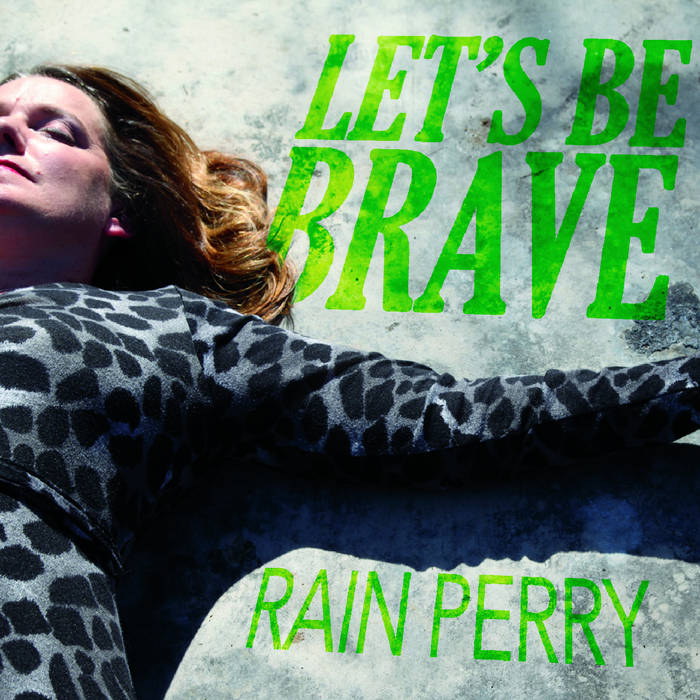 IN DECEMBER 2017, the Thomas Fire swept through
Southern California, burning 500 structures including the houses of dozens of Rain Perry’s friends and neighbors and Rain’s own music studio. Her home, thankfully, survived, but she lost all her instruments, career memorabilia and older recordings that had not been digitized.

As a longtime activist grappling with our current political climate, having just spent three years filming and touring The Shopkeeper, a documentary about the music business in the streaming era, Rain staggered into 2018 unsure of how she fit into much of anything. Like the burned chaparral around her home, though, Rain’s artistic drive resprouted with a passion, and she wrote and recorded Let’s Be Brave, her fourth album with multi-instrumentalist and Grammy-nominated producer Mark Hallman at the Congress House in Austin, Texas.

With a cover photo by Patricia Houghton Clarke of Rain lying on the burned foundation of her studio, and featuring cameos by Chuck Prophet (“St. Julie of Iowa”) and Jon Dee Graham (Bruce Springsteen’s “Rocky Ground”), with a kickass backup choir by Noelle Hampton, Jaimee Harris, Daisy O’Connor, Shawnee Kilgore and Emily Shirley, Let’s Be Brave is a joyous, honest, rocking celebration of bravery of all kinds.

Lyrics and full instrumentation at rainperry.com/music.

“Postfire resprouting: the ability to generate new shoots from dormant buds after stems have been fully scorched by fire.”
-- Juli G. Pausas, “Evolutionary ecology of resprouting and seeding in fire‐prone ecosystems”

By now I can assert that there’s such a thing as “our sound,” and I am grateful to my partner Mark Hallman for the ongoing quest to create and explore it. I love you, Marky.

This album owes a special debt to two projects by other artists: Derek Delgaudio’s In and of Itself and Lucy Bellwood’s 100 Demon Dialogues.

Thank you to my beloved family and friends and the communities of Townies, activists and artists who inspire and support me and what I do in every way.

Thank you to my sweet Billy, Woog and Stell.

This album is dedicated to Charlie, with a promise to do everything I can to make this world a happy place for him to grow up.